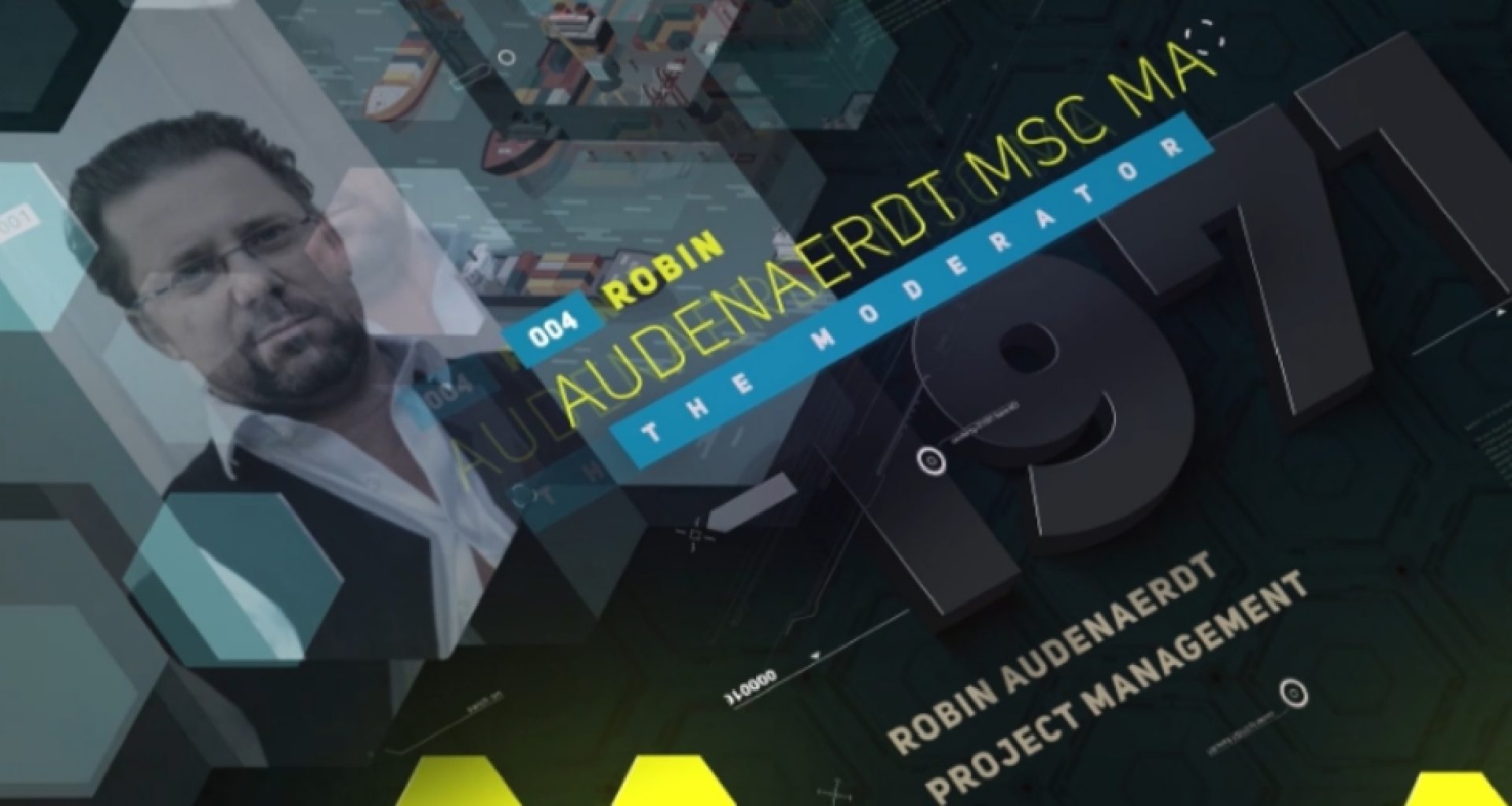 As part of our exclusive series in partnership with TOC Digital, INFORM’s Matthew Wittemeier caught up with Robin Audenaerdt, MSc, MA, who runs his own firm, Audenaerdt Project Management, to explore his views on millennials in maritime. As this year’s moderator, Robin will shape the conversation during the live event. As such, we wanted to get to know him a bit better and get an understanding of his perspective on millennials and the topics he thinks we should be exploring. This article is a teaser of what we can expect to explore in the upcoming TOC Digital Millennials in Maritime People session (#MiM20People).

MW: Robin, when did you start working in the maritime industry?

RA: I’ve been around in the ports since 1992. I had my first experience with the first fully automated container terminal in the world, which was at the ECT in Rotterdam, involving automated guide vehicles and automated stacking cranes. I’ve been working on projects and implementation for container car and freight terminals ever since.

MW: You’re clearly not a millennial, which brings us to your role on the Millennials in Maritime panel. You’re the moderator for the upcoming live session in September – is that right? What attracted you to the idea of moderating a panel with millennials?

RA: Well, mostly the idea that I like working with young people. They are mostly not affected with, let’s say, the “working virus ” and all the supporting structures, and they are still open to discussions and new ideas. That’s what I like to do, to work with these kinds of people with open minds and get ideas out of them.

MW: Interesting. Let’s circle back. You said you started working in the maritime industry in 1992. What attracted you to maritime?

RA: Well, I have a life story about that because I was born in the South of Holland. You as a German [Author’s correction – I’m an Australian who lives in Germany] might know it as “Zeeland” as well, which is close to the seacoast, of course. So, I’ve got a little bit of a sailor’s heart. When I was a little boy, I used to play with these storage trucks, parking them at the district centers, which were made of matchboxes. I combined that into a study. I studied logistics at university, and my first internship was with the Port Authority in Rotterdam. That’s how I got enrolled in the maritime industry. I like to see the goods moving around. I like looking at it as sort of a central point where all the ends seem to be knowing what they’re doing. So, the logistic coordination can be “tasted” and combined with people who “speak with their heart on their tongue and with their sleeves rolled up,” as we say in Rotterdam. That’s what makes my world. That is what attracted me to the industry.

MW: So very much a passion, if you will. What was it like working in your first team when you first started in 1992?

RA: Well, I remember that during my studies, I did some summer work in the port as a checker. I was responsible for physically checking the container numbers, which were discharged and loaded on the vessels. I was tested through and through by these big rocks of men that were working there. But by keeping it to yourself and not being too arrogant about things as a student, and also with lots of humor, I got around and they became real colleagues. So, in the beginning, it wasn’t easy, but I like working with these honest people who just tell how it’s working and what it’s like.

MW: You said it wasn’t easy. What were some of the challenges you had to overcome, and then how did you overcome them?

RA: Well, most of the challenges had to do with the lack of experience working in the force. All the abbreviations that I didn’t know of, which are a lot of them, in the ports. But if you’re still open about it and not too cocky and are willing to learn and to ask, as I said, with lots of humor, then you overcome these issues, and then you start working together on these issues.

MW: Since then, how would you describe the port environment that you’ve worked in? How has that changed? And if it hasn’t changed, what should change?

RA: It has definitely changed a lot since I joined it. Mostly to do with the introduction of automation, which is mostly the scope of my projects. And also, the role of the dockers has changed from, let’s say, the hands-on physical jobs into more white-collar, monitoring and looking ahead into planning and scheduling and having more of an overview of the process, than doing physical labor. That requires totally new skill sets for a total insight of logistics, working with automation tools, and being able to preplan automation to look ahead in the process.

Dealing with them efficiently will require manual skills. We’re actually getting more dependent on people than before.

MW: I think there’s a really interesting rabbit hole we could go down with regard to what you’ve just outlined, but I don’t think it’s in the scope of this interview. We will have to circle back to it at another date because that’s an interesting perspective as it’s directly in contradiction to that of the status quo on automation and job loss we keep hearing about.

What’s important to you in your job? Why do you keep going back to work day in and day out?

RA: Yeah, I like to summarize it in three items or themes. First of all, processes, second of all, innovation, and third, people. It’s how to make these more efficient, how to use them effectively, and, in the end, how to work together in implementing and improving those things. So, it’s process, innovation, and people that keep me coming back to the port and into a logistical process.

MW: We hear a lot of clichés around millennials, such as that value is more important than money and they want to work the least amount possible. Are these values you’ve seen with millennials that you might work with? Do you see different values with older individuals that you work with?

RA: Well, it differs a little bit, I guess. But I see in general, if they’re old or young, it doesn’t really matter.

We really need people to speak up and keep questioning the current processes in order to innovate. So, I think that’s more important than having financial stability in your job, and that takes a special kind of people who are willing to take risks and willing to move on and to innovate.

MW: Interesting … Closing thoughts? We’re into the wrap-up here. What’s one piece of advice you would pass on to the millennials who are set to inherit the maritime industry from the Baby Boomers as they start to retire over the next decade?

RA: I’m repeating myself from the last question, but my advice would be speak up, keep questioning all the processes you see around you, and just be honest about it because if you’re not willing or able to be disruptive, we will never get the innovations – and that’s what’s important.

MW: Thank you, Robin. I appreciate your time.

Robin Audenaerdt, MSc., MA, started as a project engineer at Europe Combined Terminals, Europe’s largest container port, in Rotterdam in 1995. Robin holds university degrees in logistics, business administration, and supply chain optimization from Insead. With firsthand experience at the first fully automated container terminal in the world with Automated Guided Vehicles (AGV) and Stacking Cranes (ARMG), he has been working as a project and implementation manager for container, car, and airfreight terminals and ports ever since. Not only for freight terminals but also in other logistical hubs, he has been consulting and managing logistical challenges for both public and private clients. Among other projects, he is currently acting as Project Director | Container Exchange Route for PortShuttle in Rotterdam, a special service and subsidiary of Port of Rotterdam Authority. The Container Exchange Route enables transportation of containers on the Maasvlakte in Rotterdam. A dedicated road network connects all terminals, container depots, distribution centers, and customs facilities. Using this network, autonomous vehicles transport the containers to their destination quickly and efficiently, undisturbed by other traffic. The Container Exchange Route is planned to be operational in Q4 2021 and is expected to handle over one million containers per year.

Building on the successes from the 2019 Millennials in Maritime (MiM19) panel, we’re back this year with an in-depth and focused look at millennials’ take on working in maritime. This is a must-attend session for any company looking to hire, integrate, and retain millennials into their teams.

To explore this topic, INFORM, in partnership with TOC Digital, has put together a multifaceted, multigender millennial panel to weigh in on the social issues of today and debate the millennials’ views of tomorrow. In short, millennials are now a central part of the world’s workforce, and their approach to work and broader social issues will come to define how companies perform in the coming decade.