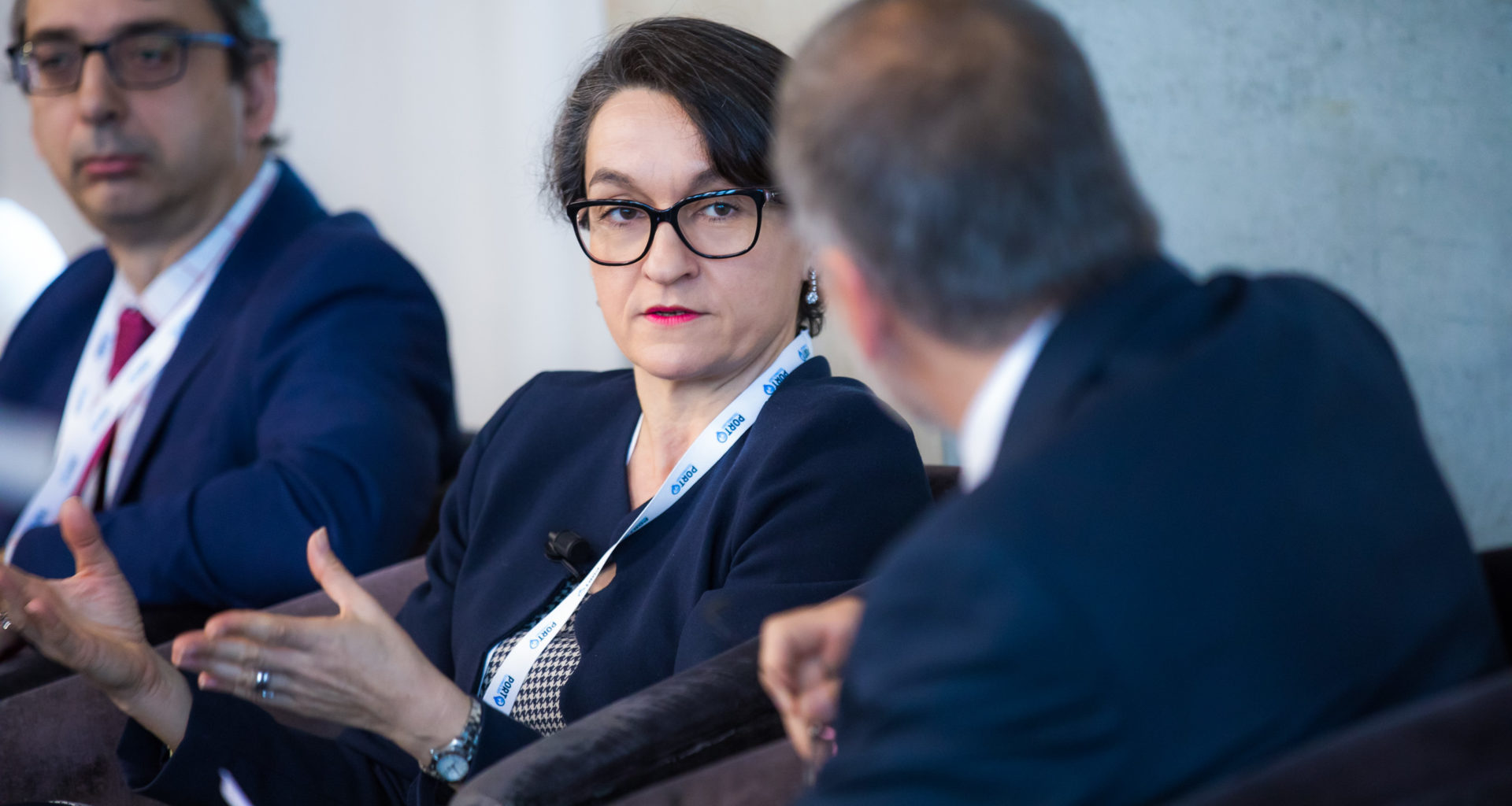 Have you ever wondered what it takes to get dozens of stakeholders to commit to sharing data within a port community system (PCS)? Join INFORM’s Matthew Wittemeier as he finds out from Mar Chao López, Head of Commercial and Business Development at the Port Authority of Valencia. They also tackle opportunities for the industry and the future for women in maritime.

MW: Why don’t you go ahead and introduce yourself to us?

MCL: I am head of a commercial port development area here in the Port of Valencia. Apart from that, I have been in charge of the port community system since last year. Through that, I got involved with digitalization and facilitating digital services to our clients.

I am a civil engineering lawyer, and I also have quite a few degrees, including an MBA, all related to the maritime business. When I first started studying civil engineering, women in Spain did not generally study for those kinds of degrees, and some of my professors even asked me what on earth I was doing studying civil engineering. But I succeeded in getting my degree. After working at the university for three months, I became dedicated to ports and port authorities, along with the private company I worked at for nine years, before I became the commercial director of the Valencia Port.

MW: That’s interesting. It sounds like you already had some challenges when you started university as a female in a traditionally male-dominated environment. We’ll come back to that. I’m interested to know how you got your start working in maritime. You said it’s always been part of who you are. What attracted you to the industry?

MCL: It was like a drop into it, like having chocolate or coffee. I love both, and I cannot stop, and this was something like that. My first experience with ports was at the Port of La Coruña, where I was born. It’s a small city in the northern part of Spain. I started working at the port authority, developing a model to level the particles of carbon emissions at the port. That was my first working experience, and afterward, I was also in charge of the operations department, which was not a typical position for a woman.

In fact, I was the first woman in Spain to be in charge of the operations department in a port, which probably shows my age. But anyway, it was because I loved the operations. It was really lively, and every day was different. It keeps you alive. Also, you would be problem-solving every day, or there would be some incident. It was a very lively place, and I loved the work. I moved on afterward to the Port of Vigo, also working in the operations department, commercial activities, and quite a few other areas. Later, I moved to the private side and port services. Everything I did was related to it.

MW: In your early years working in the maritime sector, what were some of the biggest challenges you faced as a woman?

MCL: In the beginning, some people were really amazed to see me organizing the operations department. And later, at the private company, we were awarded an international contract in Yemen, and I was sent to Yemen. As you can imagine, there was an LNG terminal, a dedicated terminal, with almost 900 men and me, the only female.  Also, the workers were all Yemeni people. And for them, it was really complicated because they felt dread that first day when they saw me. They didn’t even speak English, except for one worker, who appeared to be the official translator in the company.

But after that first surprise meeting, I found that if you just worked hard enough and respected everyone, that’s what matters in the end. Being respectful and working hard is the only recipe for success.

MW: Do you think you had to work harder than a male would have had to work?

MCL: In the beginning, yes, I had to work harder than the men to be recognized. Nowadays, no. Nowadays, I feel it’s more normal because more women are working. It’s a part of normal life here in Spain now.

MW: You mentioned that last year you inherited the responsibility for the port community system at the Port of Valencia. What does that project entail?

MCL: The project is a one-stop platform for all the companies that work at the port. With one click, every administration that is part of releasing cargo through our port does so via the PCS. It’s a digital platform that allows all parties in the supply chain to be interconnected. Nowadays, we’re very focused. At the port, we’re integrating inland terminals. In the future, we plan to include incorporating the shippers, the end clients, for the sake of transparency and because, more and more every day, data is infrastructure. What I mean by that is that everyone wants to know all the data in real time and be able to analyze it immediately. That would be a value-added service. And for us, it’s part of our core business of offering reliable and better services. It would be a competitive advantage for us, which is why this responsibility is given to the commercial department.

MW: What do you think are the biggest opportunities for maritime in the next five years?

MCL: One of the biggest opportunities for the maritime business is to go digital. Most of the maritime companies and big shipping lines go through vertical integration promoting digital platforms. But I think the future is in standardization. It makes no sense for everyone to have their own platform when it costs a lot of money to integrate. This is why I think standardization should be the goal. Standardization would save the costs of integration and facilitate the global supply chain.

MW: What do we need to be doing today to position ourselves to address the challenges of standardization and integration? What are the first steps?

MCL: The first step should be making the agreement to standardize. Afterward, it is sitting at the table with all the big shipping lines and building the platform. Having the goal of standardization should be the first step. Later, there will need to be administration and gaining the confidence that it is possible to achieve when so many governments and administrations are all single-window systems at a state level. I think the European Union is also trying to do a single-window at the European level.

At the end of the day, it’s all very good on paper and in presentations. But when you enter reality, what you find is that the sanitarian ministry has a platform, the commerce ministry has another, the animal ministry has another, and so on. This is completely crazy. I think there must be regulations that help coordinate the ministries and countries, which means you need to get volunteers to achieve the goal. That will be the first step, but the big challenge is standardization and simplifying the procedures to go digital in the easiest way.

MW: Spoken like someone who works in technology and who undoubtedly has done a lot of standardization, or rather integration, as part of the PCS. It sounds like you’re coming from a center of experience instead of just talking broadly about what the industry needs.

MCL: Here, it’s easier because in the end, it’s the port community. But even here, it’s complicated because every company, in the end, has the same at a reduced level compared to Valencia. What I do is sit them all down at a table and say, “Okay, what we need is this. We have to go there.” I tell them, “I have to adapt your system to the other, and I will deploy a web service to get the data that you need, and all of you will require the same data.”

While that’s easy to understand, it can get complicated because you’re dealing with people. There’s a person in charge, and I have to change their mind and drive a change in their working life, which is always difficult to do. But people should always be at the center of our work and our decisions because if they aren’t, what we’re doing won’t work.

MW: Interesting. The maritime industry’s traditionally male-dominated. How do you envision attracting more women into the industry?

MCL: As I mentioned at the very beginning, it used to be much harder. Nowadays, things are becoming normal, and you find women in shipping lines, administrative work, and management positions. It’s a matter of time, but I think things like this are becoming standard, even in the maritime business. At the beginning, and even well into my promotion after I received my degree, many women didn’t enter my sector because it was very rude and very hard. There was the image of pirates – they harm, and they’re just all these bad things. But it’s not like that nowadays, and it’s quite normal to meet women.

MW: We’re each entitled to our view, and that’s why we interview so many different individuals as part of this series.

We’ve come to the end. Closing thoughts – if you had one piece of advice for a woman looking to succeed in maritime, what would it be?

MCL: Think, believe, dream, and never give up.

MW: Very much to the point. Thank you so much, Mar, for your time.

MCL: Thanks to you. Thanks for giving me this opportunity.

Who is Mar Chao López?

Mar Chao López has been the Head of Commercial and Business Development at the Port Authority of Valencia since October 2017 and in charge of the ValenciaportPCS (Valenciaport Port Community System) since April 2019.

Since its inception in 1991, Mar Chao López has developed her work in the field of logistics in both public and private sectors. She was the general manager of the Reyser Group. In the public sector, she has worked for the Port Authority of A Coruña as head of the service provision unit and at the Port Authority of Vigo as head of the port operations division and the operating department. Between December of 2006 and March of 2009, Chao was the CEO of transports of the Xunta de Galicia, served as adviser in the Port Authority of Ferrol, and assumed the presidency of Ports of Galicia.

What is Women in Maritime?

The Women in Maritime initiative is a combination of a series of interviews and conference sessions brought to you by INFORM as part of their broader diversity program. The first step in increasing the scope of diversity in any industry is highlighting the diversity that exists and creating opportunities for conversations around diversity. While it is often men we think of when we consider the mental image of most logistics’ roles, women contribute to the industry in all its facets and at all levels of seniority. The initial aim of Women in Maritime is to show that diversity and to bring the conversation around it to life.